March 2018 has been another good month for the Ottawa real estate resale market.

Condos have done very well every month over the past 12 months:  up about 20% in number of sales, and up almost 10% in March 2018 compared to 2107.  Average prices of condos slid a bit this March compared to last year, but still up overall for the 12 months.  (Which is still an improvement because the sales and sale prices of condos has been so poor since 2012.)

You may be interested to take a closer look at the charts below:  there was a huge jump in number of sales in May 2017, and significant jumps in June and August and November as well.

Pricewise, condos had an significantly large jump last June, and again this February, which other noticeable increases in September and August 2017.  It’s not unusual for their to be a “price correction” (like this March) after a month with very strong sales.

Freehold properties also did very well in March in Ottawa.  Strong price increase of almost 10% over last March, and over 11% increase in number of sales compared to last March.  And year-over-year both numbers are showing very strong performance as well.

You can also take a look at the Royal LePage Performance Realty charts for March 2018.  (Please note that there will be some differences in numbers because our stats are for the major Ottawa urban area, whereas the office stats are from the greater municipal Ottawa area which includes some smaller towns and more rural areas.) 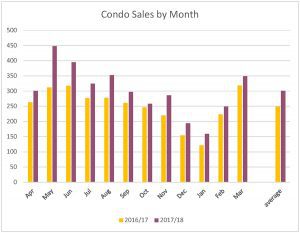 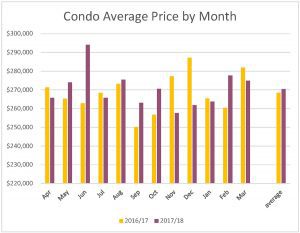 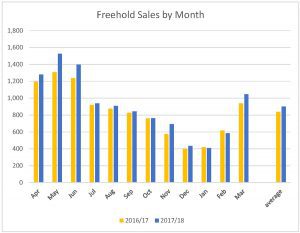 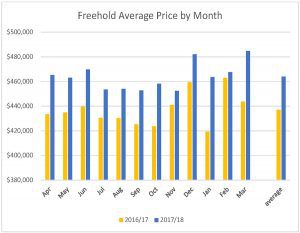