The Ottawa real estate market is still going strong, with many (perhaps the majority) of sales still being multiple offers (aka “bidding wars” in other cities).

Condo sales have been up significantly every month for the past 12 months: June was up almost 11% over June 2017, and overall up of 17% year-over-year.  The average sale price was largely flat for June 2018 compared to June 2017 and also year-over-year.  Still, after many years of dropping prices, almost all resale condos prices are now at least a bit ahead of where they were in 2012 before the federal government fiddled with mortgage rules.  (It’s interesting to check out the month-by-month detailed charts below which show that the average price was noticeably higher in many months – but sometimes for this past year and sometimes for the previous year!)

Freehold properties have also been good news for sellers.  The good news:  average prices are up about 4.1% this June over June 2017, and about 5.6% year-over-year (and consistently higher in every month of the past year).  The number of homes sold in June dropped about 10% this June compared to 2017 which likely has put more pressure on the prices to go up! But year-over-year is the number of sales is still up more than 5% it’s just that the number of listings available has not been as high as normal, again putting pressure towards higher prices.

As always, be aware that these figures are for the urban & suburban Ottawa area.  Your particular neighbourhood may have done better or worse.  Just contact us and we’d be happy to look up specifics for an area of interest to you! 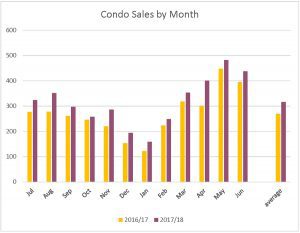 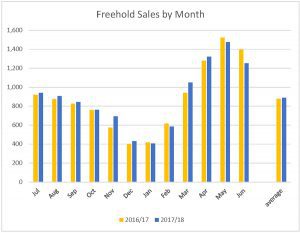 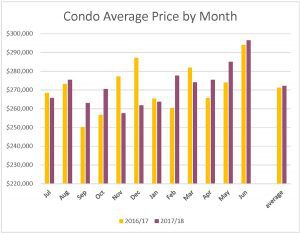 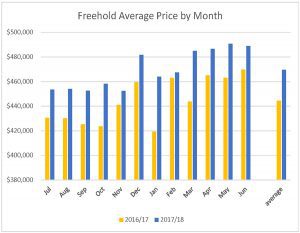