Time to sell (“days on market”) is probably the fastest it’s ever been in Ottawa.

So a terrific time to be a seller.  But a frustrating time for buyers.  Almost every property sells for $50,000 to $150,000 over the asking price in multiple offers.  At least that has been our impression.

So I was surprised to see that a chart comparing average list price to average sale price did not show the sale prices above asking prices.

I then did an extract of condos sold during July 2020 in Ottawa to examine this more closely.  Yes, one property actually sold for 55% more than asking!  But out of 531 condos sold, 242 sold at asking price or less, and the other half sold above asking.  This is still an unusual market – very much in favour of sellers.

Notice the charts below:  the average monthly price for freehold properties did the regular Ottawa slow-but-steady rise over the last 10 years.

Condo prices pretty much stagnated after the feds fiddled with mortgage policies and CMHC insurance policies in 2012.  But look at the rise starting in 2018, and the major jump the last year or two!  But will this continue?  People are starting to rethink living in an apartment that has no exterior space and all the common amenities shut down for months during COVID-19. 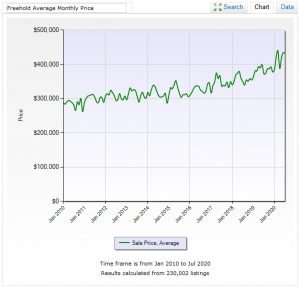 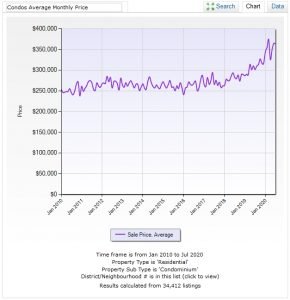 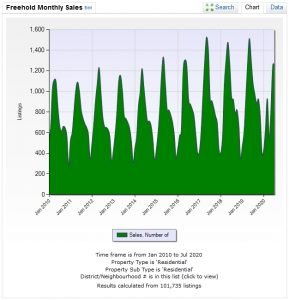 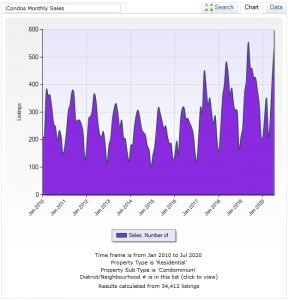