Home sales are still doing well in Ottawa in 2019 despite all of the polar vortexes we’ve been having! (Who even heard of Polar Vortexes a couple of years ago, and now they’re everyday occurrences?)

Condo sales in February were virtually the same as Feb 2018, but over 6% more freehold properties sold in February this year than last year! Most properties are still attracting multiple offers, so great for sellers. Very tough for buyers, because there is very low “inventory” – homes listed for sale.

It is better to compare year-over-year than month-over-month however, as temporary events (like polar vortexes) can affect the sales in particular months. For the 12 months of March to February, condos make a very strong showing – up over 11%! Freehold properties sold virtually the same number in both years (remember the low inventory we’re experiencing?). So the two categories show completely opposite characteristics by these 2 measurements.

Prices of both condos and freeholds are doing very well, both for February to February and year-over-year. The continuing low inventory is likely to cause this to continue for freeholds, but condos may not see the same benefit as many builders are restarting new builds that they had put on hold. This is offset by the fact that new condos are smaller, and often significantly more expensive per square foot than the older buildings.

Here are a couple of charts reviewing the past 5 years, and some of our observations.

The number of sales of condos shows healthy improvement for every month since January 2017. The seasonal fluctuations continue to occur but in almost every case they appear better than the preceding 3 years.

Condo average prices aren’t showing as significant a rise: from about $260,000 in Jan 2014 to about $285,000 this February. Even so, the change between those figures is about 10% over the 5 years which is terrific considering the stagnation and even price losses that occurred since the feds started fiddling with mortgages in 2012.

Hang on to your hats! 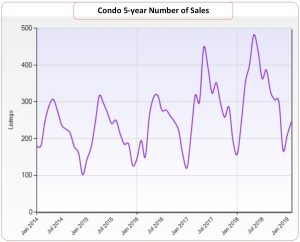 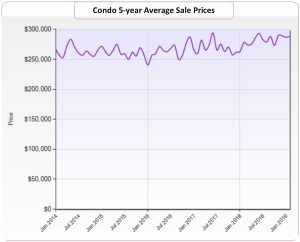 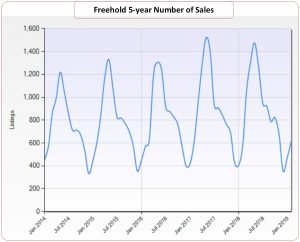 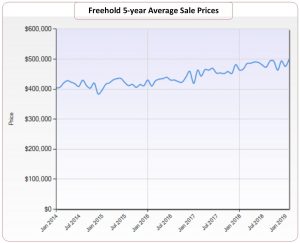