The Ottawa real estate market did well overall in 2017, year-over-year with 2016.  Sales of both condos and freehold homes was better in every month of 2017 compared to 2016, with the exception of January.  January sales can be very affected by the weather.

Average prices for freeholds were well up for the year, and for every month except January.  Condo average prices show a different trend:  up in most months, but down in April, November and December.  December showed a disturbing drop of almost 10% in average price.  Overall up by 2.2% over 2016.

Resale condo prices tend to be greatly impacted by new developments.  There were a few new towers announced for downtown, though many are having difficulty selling all of the units, and many other projects have been put on hold.

Perhaps the jump in number of sales in both categories was caused by people looking to move from a condo into a detached home for more space or to raise a family before the latest round of mortgage rule changes which took effect January 1.  And that could account for the drop in condo prices if people were anxious (or were required) to get things settled before the start of 2018.

Interestingly, there were big increases of freehold sales in almost every month from May onwards.  Coincidentally, the Ontario government imposed the “non-resident speculation tax” in April for the Toronto Greater Horseshoe region.  But they also say that there’s only a small percentage of foreign ownership?  Condo sales also took a big jump starting in May…

Condo resale prices are still struggling to get back to 2012 levels in many buildings, when the first round of significant mortgage rules hurt first-time and investor buyers.  2017 saw resale condo prices almost back (and in some cases above) where they were in 2012.

Traditionally the Ottawa market has been “slow and steady”, without the dramatic jumps and drops of Toronto, Calgary and Vancouver.  Hopefully the new mortgage rules cause only minor perturbations in the market. 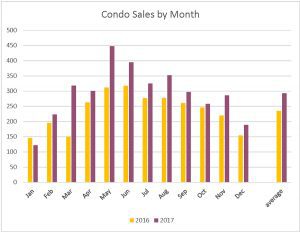 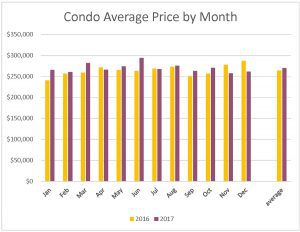 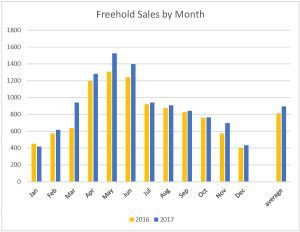 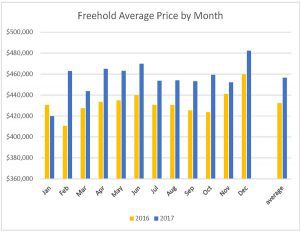