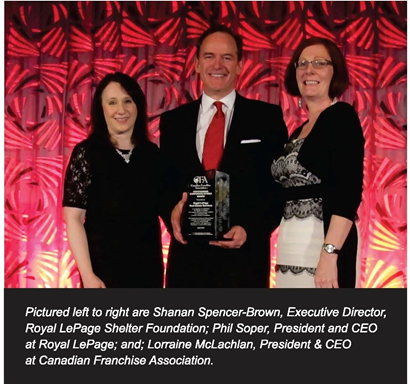 TORONTO, APRIL 14 – Royal LePage Real Estate Services has been named the 2015 Outstanding Corporate Citizen by the Canadian Franchise Association (CFA). Royal LePage, Canada's largest and oldest  real estate  firm, received this  award  for demonstrating sustained support for the local communities through its network of over 600 brokerage offices from coast to coast, and for philanthropic innovation on a national scale. The company’s 16,000 Realtor® network has raised over $20 million through the Royal LePage Shelter Foundation, the largest public foundation in Canada committed to ending violence in the home, and providing support to the women and children who fall victim to it. 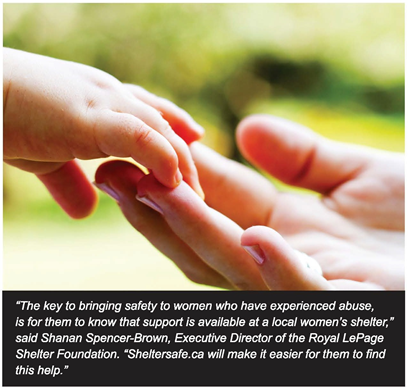 The Royal LePage Shelter Foundation has been named a national partner in Sheltersafe.ca­ a new online resource managed by the Canadian Network of Women's Shelters and Transition Houses- along with RBC Foundation. With this partnership, the real estate company continues its commitment  to helping  women  and  children  who  have  experienced  domestic  violence  seek support at a local shelter. Any time of day or night through Sheltersafe.ca, women can find help close to home.  Funds will be provided to underwrite the costs of the new website. Sheltersafe.ca utilizes a clickable map to help women connect quickly with the shelter in their community. In addition to being a safe place to stay, shelters have 24 hour phone lines to support women in crisis.

Check out more articles in the with similar categories – Article, Charity