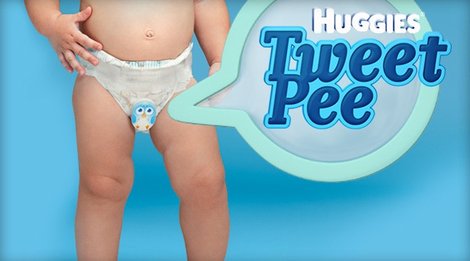 Brazilian parents are getting a jump start on social media parenting, with a device that sends a tweet when their child has a wet diaper, thanks to a Huggies product called TweetPee.

TweetPee is apparently a small device that looks like a bird, with a sensor that clips to a diaper. When the diaper is wet, it will alert parents by sending a tweet.

The device works with a TweetPee app that lets parents monitor diaper moisture, inventory and keeps count of the average amount of diapers their baby uses.

A spokesperson for Kimberly-Clark Corp., which owns Huggies, told CBSNews.com that the device is real, but it is only being tested on four parents, with plans to expand to 10 by July.

see the video & read the rest…